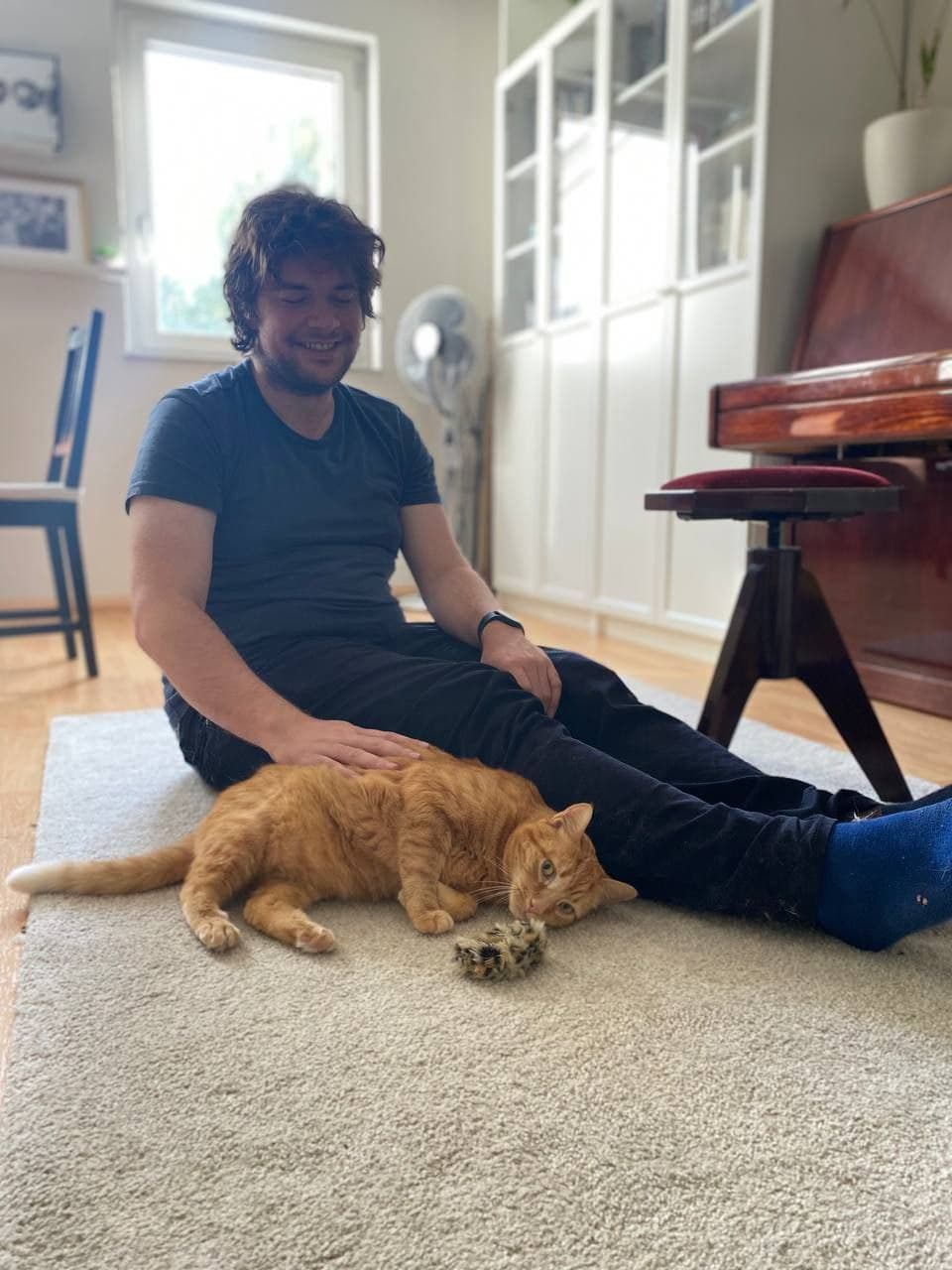 This blogpost has been a collaboration between myself (Florian Felix) and Simone Ramello, who wrote the second half about stability theory and separably closed fields with endomorphisms and suggested the idea. —

Separable extensions are the kind of extensions you forget about again after learning about them in the context of Galois theory, if you are not working in an algebra-adjacent field of study or if you prefer fields of characteristic $0$. However, if you are in positive characteristic the essence is that they are the extensions that are not eldritch horrors that will haunt your dreams, we will elaborate on that and then tell you a bit about how a model-theorist thinks of them:

In characteristic $0$ this is a boring definition:

The proof also suggests which polynomials make problems in the case of positive characteristic. If $\mathrm{char}(f)=p$, then for instance $X^p-X-a$ might be irreducible, but has constant derivative.

Definition. A field $K$ is called separably closed if there is no proper separable extension $L/K$.

It is not clear to me what makes them so perfect, but rather they are not hideous:

Definition. A field $K$ is called perfect if $K^\mathrm{sep}=K^\mathrm{alg}$. If $\mathrm{char}(K)=p$ and $K$ separably closed, we measure how far it is away from perfection via the imperfection degree or Ershov invariant $e$, defined via $p^e=\deg(K/K^p)$ - if $\mathrm{deg}(K/K^p)$ is finite and is $\infty$ otherwise.

We denote the theory of separably closed fields of characteristic $p$ and imperfection degree $e \in \mathbb{N}$ in this language by $\mathrm{SCF}_{p,e}$. It admits quantifier elimination:

The proof only uses a few facts about fields of definition and general varieties and enables us to do the following.

Proof: It suffices to prove that for a $\aleph_1$-saturated model $L$ and a countable model $K$ and $A \leq K$ and $B \leq L$, if $A \cong B$, this isomorphism extends to an elementary embedding of $K$ into $L$. Here is how the added $\lambda$-functions save the day: Because every substructure needs to contain all coordinates $x_{\sigma}$ for a given $x$ we see that for a given substructure $k$ of a model of $\mathrm{SCF}_{p,e}$ the substructure has imperfection degree $e$: It has to be at least $e$ since ${a_1, \ldots,a_e} \subseteq k$ and it is at most $e$ because all the coordinates appear due to the $\lambda$-functions witnessing independence. Now this is easy, let $k_1$ be a substructure of $K$ and $k_2$ a substructure of $L$ with $k_1 \cong k_2$, then we can easily extend this isomorphism to the separable closure of their fraction fields, which have to have the same imperfection degree like the ambient structure and then we complete with model completeness and saturation of $L$.

If you are a model theorist, and you are given a theory, the first question you might come up with is: How many models are there? Or more precisely, if you give me a cardinal, how many models (up to isomorphism) are there of that cardinality? The question is somehow natural – classifying structures down to some decent notion of equality is common throughout mathematical fields (pun not intended), and in a sense one would like to know exactly how extensive the library of possible structures to pick from is. As natural as it is, it ends up being a highly complicated investigation; for a cardinal $\kappa$, there are at most $2^\kappa$ models of cardinality $\kappa$, but the whole spectrum between $1$ (so-called $\kappa$-categoricity) and $2^\kappa$ is a priori possible. The next natural step, then, is to reduce the class of theories we look at: we want tame theories.

This admits a very nice rephrasing in terms of the omission of certain combinatorial patterns, under the belief that one might obtain tameness (or, in other words, remove wildness) for theories by prescribing that their definable sets avoid certain infamous (as the kids say, cursed) combinatorial configurations. This philosophy guides the efforts in abstract (or pure) model theory, leading to the identification of classes of theories like \(\mathrm{NIP}\) theories, \(\mathrm{NIP}_{n}\) theories, \(\mathrm{NTP2}\) theories and so on. These combinatorial definitions allow us to split the landscape of mathematical theories into chunks, a bit like a map, in which we can place the theories we know according to their complexity. Before moving on to see how this relates to our favourite fields, let us see an example. First of all, what is the combinatorial pattern omitted in stability? One wants to avoid the presence of a linear order (definable) in the structure, to avoid the insurgence of too many cuts (and hence too many types, and hence too many models). We will say that a theory $T$ has the order property (OP) if there is a formula $\phi(x,y)$ and a model $M \vDash T$ and elements \((a_i)_{i \in \mathbb{N}}\), \({(b_j)}_{j \in \mathbb{N}}\) in $M$ such that $M \vDash \phi(a_i,b_j)$ if and only if $i \leq j$. A theory with the order property encodes the order $(\mathbb N, \leq)$, which is a red flag – as said before, this determines cuts, and that is too high a complexity. We will then say that $T$ is stable if it doesn’t have the order property.

Example. The structure $(\mathbb Z, +, \cdot, 0, 1)$ (affectionately known as the Prince of Darkness, or Satan), or rather its theory, has the order property and is highly unstable. To see why, remember that by the so-called Lagrange’s Four Squares Theorem, every natural number can be written as the sum of four squares of integers. In other words, we can define $\mathbb N \subset \mathbb Z$ by saying that $x \in \mathbb N$ if and only if $\exists x_1, x_2, x_3, x_4 (x = x_1^2+x_2^2+x_3^2+x_4^2)$. As we have defined the set of positive elements, we have effectively defined the linear order $\leq$ on $\mathbb Z$, and hence proved that this theory is not stable.

What about fields? Well, there are good news.

The proof is achieved with the help of quantifier elimination through a third characterization of stability – namely counting types. As with models, one says that $T$ is ($\kappa$-)stable if, for any model $M \vDash T$ and $A \subseteq M$ of cardinality $\kappa$, the set $S_1(A)$ of $1$-types over $A$ has size at most $\kappa$. We have thus seen that $\mathrm{SCF}_{p,e}$ is a relatively tame theory, and in fact it is in a sense the only known theory of fields which happens to be stable (algebraically closed fields are also stable, in fact being algebraically closed is equivalent to being $\omega$-stable for a field!).

We are quite far from seeing a definite answer for this conjecture, yet all evidence (e.g. work on the henselianity conjecture, or on its cousin, Shelah’s conjecture around NIP fields) seem to indicate a positive answer to the so-called stable fields conjecture.

Separably closed fields are all nice and well-understood, to the point that their theory sits comfortably in the paradise of stable theories (where almost all machinery seems to work as it should). One might then be tempted to add a little spice to their structure; we have already seen an enrichment of the original pure ring structure, via $\lambda$-functions – this is however, in a sense, an harmless expansion. It is an expansion by definable objects, and while naming them gives us QE, it is not a very natural expansion, where ‘natural’ might be defined as ‘met in their daily life by the average mathematician’. One might want to enrich this structure further, by adding some more interesting objects, like endomorphisms.

This is per se not a complicated recipe – it is just the addition of a symbol $\sigma$ for some map of rings $\sigma: K \to K$ to our language. The theory will then have to also mention $\sigma$, and the fact that it is a map. All of this is straightforward. What happens next, however, is highly complicated. The resulting theory, or rather its model companion \(\mathrm{SCFE}_{e}\), is terribly non-trivial, and while it is somehow building up on the stability of $\mathrm{SCF}_{p,e}$ (most proofs rest on the shoulders on the machinery of canonical bases), it is fundamentally more complex.

Theorem. (Zoé Chatzidakis, Ehud Hrushovski) Consider the language $\mathcal{L}_1$ obtained from the language of rings expanded with a symbol $\sigma$ for an endomorphism and with countably many $n$-ary relation symbols $R_n$ for $\sigma(K)$-linear independence in $K$. The model companion of the $\mathcal{L}_1$-theory of separably closed fields of degree of imperfection at most $e$ with an endomorphism $\sigma$ is axiomatized by:

The last axiom is very weird, and at first doesn’t seem intuitive at all, yet it is exactly what is needed to ensure the sufficient richness that makes this theory the model companion of the natural theory of separably closed fields with an endomorphism. In fact, one might argue that this theory is very natural in the following sense: it describes the asymptotic behaviour of the Frobenius on a separably closed fields. More precisely, take the set $Q$ of prime powers. If $q = p^n \in Q$, let $F_q$ be a separably closed (but not algebraically closed!) field of characteristic $p$ together with $\sigma_q(x) = x^q$. Let $F^* = \prod_{q \in Q} (F_q,\sigma_q)/\mu$ be the ultraproduct of these fields with respect to a non-principal ultrafilter $\mu$ on $Q$. Then,

A Week Of Mathematical Outreach, The Good, The Ba(r)d And The Ugly

A week of mathematical outreach, the good, the ba(r)d and the ugly I like to talk about my research. I really do, even with people, who are not model theoris...